At the centre of this story is our ancestor, Corporal Edward Marks of the Royal Horse Artillery and his part in the battle. As a result, the King of Sweden awarded him the Swedish silver gallantry medal for distinguished service at the Battle of Leipzig on 18 October 1813. [FÖR TAPPERHET I FÄLT’ (‘For brave conduct in the field’)].

How did he come to be fighting with the Swedes against Napoleon ? How did he get there ? Why was he there ?

It is a long and complicated story. We have known for many years that Edward fought at the Battle of Waterloo in 1815, for which he got a Waterloo medal and for which we hold a replica. In fact, there is a story called, 'Waterloo' on this website recounting that event. But it wasn't until 6th August 2016 in an email from the official Waterloo website that we learnt about Leipzig and that started us on a journey. That journey culminated 4 months later on 1st December 2016. On that day we were guests of O Battery of the Royal Horse Artillery at their base in Tidworth, Hampshire and saw both original medals and a replica that they have on permanent loan from the Royal Artillery Institution.

Let's go back to the beginning, the early 1800s. The clue is that Edward in 1813 was in O Battery of the Royal Horse Artillery (RHA) and in 1815 in the 2nd Rocket Troop of the RHA. Both O Battery and the 2nd Rocket Troop were equipped with rockets. A traditional RHA troop was equipped with a 6-pounder cannon pulled by 6 horses and everyone in the Troop was mounted on a horse, making a troop extremely mobile. A Rocket Troop had 4 horses pulling a limber holding supplies and its men were mounted but instead of a cannon were armed with Congreve rockets.

The reason Edward was at Leipzig was because of Sir William Congreve. He designed and developed the Congreve rocket in 1804, based directly on Mysorean rockets, for use as a British military weapon.

The Kingdom of Mysore in India used Mysorean rockets as a weapon against the British in the wars that they fought against the British East India Company in the late 1700s. Lieutenant General Thomas Desaguliers, Colonel Commandant of the Royal Artillery in Woolwich, was influenced by the reports about their effectiveness, and he undertook several unsuccessful experiments. Several Mysore rockets were sent to Woolwich for studying and reverse-engineering following the Mysore wars. (Congreve's father was now the comptroller of the Royal Arsenal). Even so, Congreve had to start his project in 1804 with his own funds. The first demonstration of his solid fuel rockets was in September 1805. By 1806, Congreve had developed 32-pounders that would travel 3,000 yards.

A little more about Congreve's rockets. You will all know rockets from Firework displays or Guy Fawkes Night. A cardboard tube attached to an 18" long stick that you sat in an empty milk bottle, lit the touch paper, stood back and watched it fizz and shoot into the sky to explode.

Congreve's rockets worked on the same principal but considerably scaled up, as you can see in the adjacent picture. There were heavier siege rockets but a medium siege rocket had a 24 - 42 pound warhead with shot or shell, a 20 foot pole and a range of around ½ a mile. A light rocket had a 6 -18 pound warhead of shot or shell, an 8 foot pole and a range of over ¼ of a mile. They were fired from a quickly mounted tripod or as at Waterloo in the heat of battle, literally stuck in a hedge or laid on the ground and aimed at the enemy.

At the time, Napoleon was on the rampage. By 1812 he had invaded Russia, entered Moscow, which had already been burnt and evacuated by the Russians. He had then been forced to retreat by the cruel Russian winters and the defending forces. By 1814, with his allies, he had retreated / retrenched and was in Germany.

The British Army saw this as a good opportunity to test the new rockets in war conditions. So in May 1813 the O Battery of the RHA was brought up to strength, (including Corporal Edward Marks) under the command of Captain Richard Bogue and designated 'The Rocket Brigade'. They were to be dispatched to fight with the King of Sweden's force, alongside what seemed to be most of the European Countries opposing Napoleon. 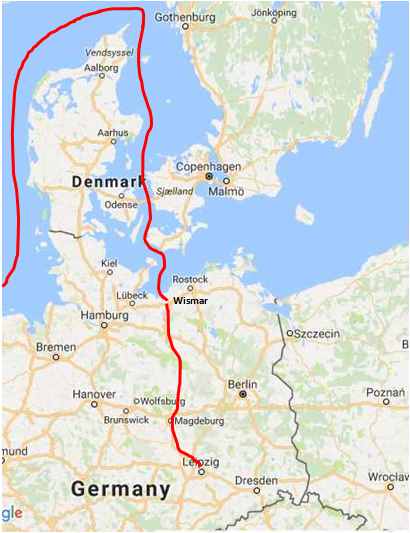 So, O Battery / The Rocket Brigade of the RHA comprised of just 145 men and a similar number of horses and their revolutionary weapon, sailed from Ramsgate in Kent on 11th June 1813. After crossing the North Sea, going up, around Denmark and down the other side, they landed in Wismar on the Northern coast of Germany, around 250 miles north of Leipzig on 8th August 1813.

This modern map may aid you : -

Bogue marched south and eventually joined the main Army of the North. On 2nd October the Rocket Brigade was attached to the bodyguard of the Crown Prince of Sweden "with the understanding that on days of action it was to be more at liberty and subject only to the directions of Captain Bogue".

The Battle of Leipzig commenced on 16th October but it wasn't until the 18th that Captain Bogue addressed himself to General Winzerode, expressing his desire to see the enemy and requested permission to engage. At 3pm that day the army was fully deployed and during the second attack on the village of Paunsdorf, Bogue lost no time in advancing in front of the whole army and opening a destructive fire on the 5 battalions there. A very hot combat ensued and the enemy unable to withstand the well directed fire from the Rocket Brigade, fell into confusion and began to evacuate the village in some disorder. Bogue, seizing the moment charged at the head of a squadron of Cavalry but there was still plenty of fight left in the French and they drove Bogue and his small force out of the village. Seeing this, Bogue's second in command, Lieutenant Strangways brought the Rocket Brigade up in close support. Under the well directed fire of the Rocket Brigade, the retreating and panic stricken enemy, turned around and taking off their caps gave three huzzas and every man to the number of between 2,000 and 3,000 men, surrendered to the Rocket Brigade which was a mere........145 men.

The intelligence of this success was communicated to the Crown Prince of Sweden who sent his thanks. Later in the day in another attack near Sellerhausen, which 'paralysed' a square of infantry men, Captain Bogue was struck in the head by a ball from a rifleman and instantly killed.

The Army of the North triumphed. The Rocket Brigade's casualties at Leipzig were one officer and one man killed, 6 wounded and 26 horses killed or wounded.

So, Napoleon having lost the day continued to retreat back to France. This was his first decisive defeat and led, within 6 months to his abdication and exile to Elba from where he escaped and regained power before in Belgium in 1815 he was again defeated at the Battle of Waterloo. After this his power decreased; his decline and eventual exile and death followed.

After the success at the Battle of Leipzig, the King of Sweden awarded Captain Bogue a medal which he sent to Bogue's widow and also a gift of 10,000 dollars. Bogue was buried in Taucha churchyard, 4 miles from where he fell and a stone monument erected over his grave. Medals were also awarded to 9 other Rocket Brigade members. Then in 1820, the Swedish King awarded 5 more medals to :-

From a Swedish archive we hold a copy of the 1820 instruction to the Swedish civil service to issue the medals for presentation in the UK.

The Battle of Leipzig was described as the most important battle of the 19th Century, helping to shape modern Europe - yet it barely registers on these shores. It involved 600,000 combatants, making it the largest battle in Europe prior to World War I and enabling just 145 men of the RHA to play an influential role in the battle that was entirely disproportionate to their size.

Even to this day the O Battery of the RHA vehicles still proudly carry the Swedish flag and their officers toast the King of Sweden.

And now, after all the years, these are their colours as shown on a commemorative medal issued for the bicentenary of the battle in 2013 : - 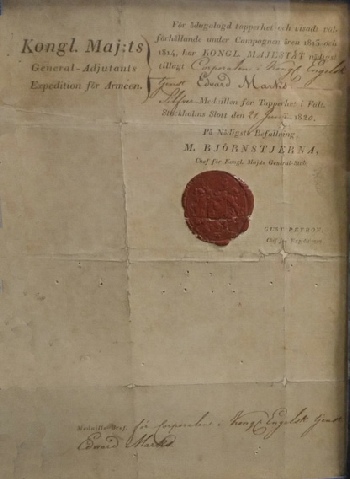 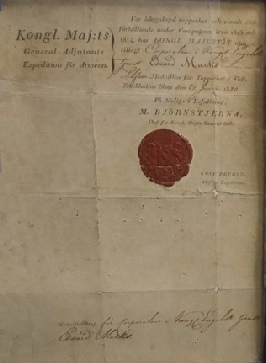 So, in conclusion may I suggest that we offer up our thanks to Edward who fought Napoleon in 1813 and again in 1815 and on each occasion, Napoleon came off worse !

An extremely brave man and an ancestor to be proud of.

See the story, Waterloo, which is also about Edward 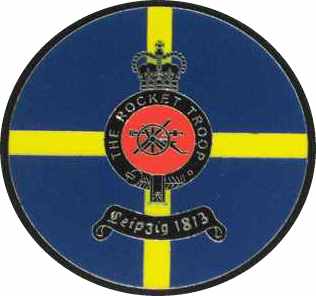 Here are Edward's 2 medals and a reproduction in their display case: -

And this is the original Swedish presentation scroll, dated 21st June 1820 : -