Mary was at Godolphin for the last three years of the war and the early part of the peace. During this time she passed her Matriculation Exam and moved to the Sixth Form. Mary had wanted to become a Primary School Teacher but when her brother was awarded a scholarship place as a boarder at Bancroft’s School, Mary left school to start work. Without telling Mary, her Father wrote to the Headmistress who then informed Mary that she was leaving school immediately and should now go home. Poor Mary thought she had been expelled! At home she was shown an advert for a junior position at Fulham Borough Council and thus Mary began a career in Local Government.

At work Mary progressed, moving to the London County Council (LCC), then, when the LCC was abolished, to the enlarged Borough of Hammersmith and Fulham. Here, she eventually became Deputy Head of Social Services but when the opportunity presented itself Mary decided to take early retirement.

Computers were coming in and Mary had no intention of learning about them and she disliked the impact of Government cut backs. In retirement Mary generously devoted a large amount of her time to helping elderly relatives, both parents and then a succession of aunts, when they became elderly and frail.

Mary was always keen on sport – watching it, not playing. She used to delight in sharing that due to the gym at school being bombed, only limited PE lessons could be held in the School Hall! Mary watched football, at Craven Cottage the home of Fulham FC where for many years she held a season ticket. Athletics were watched at the White City Stadium, but tennis was the abiding interest. The young adult Mary spent her holidays at Wimbledon, queuing up overnight when it was still possible to get into some of the show courts if you were early enough.

Mary was always a collector of china, glass and books. In retirement this hobby increased and for a while Mary ran a stall at Covent Garden Market, it seemed she bought far more than she ever sold! Mary also became interested in family history, tracking down the Swedish side of the family. This led to exchange

visits with cousins of her own generation.

Mary never married but kept up with the one school friend Audrey Norris, both living all their lives in Fulham.

Once into her eighties Mary’s health started to deteriorate, and she was later diagnosed with vascular dementia. The final 21 months of Mary’s life were spent in the Brentwood Care Centre, close to her brother’s home, where she was looked after by a caring and loving team. Corona virus meant that her brother John was unable to visit for the final four months, but would speak to Mary via a regular Skype call. Mary passed away of old age and dementia. Her funeral was unusual, with only John present and with friends and family from around the UK and overseas watching online. 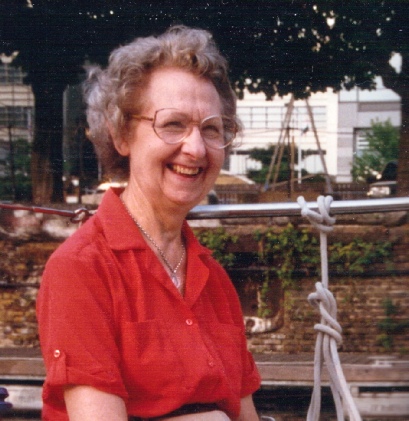